Norton Vs McAfee Vs Kaspersky: Which One Is Better

McAfee, Norton, and Kaspersky are three of the most prolific and promising antivirus packages you will ever find in the market. We understand that you wish to get all the major antivirus players on your device for security. But, technically, it is not possible.

So, you have to decide between the three top-tier antivirus players to pick one. And that brings the biggest question in front of us, “Norton Vs. McAfee vs. Kaspersky, which is a better antivirus for you?” Well, this battle between the antivirus giant is no easy joke.

Norton Vs McAfee Vs Kaspersky: Reviews – 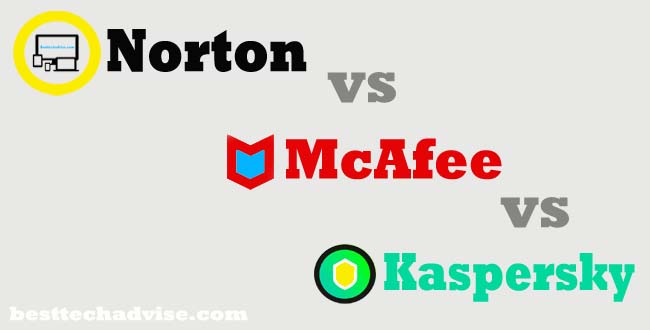 Undoubtedly, all three antiviruses scored the perfect 100 on malware detection, scanning, and protecting the device. So, their performance is pretty neck to neck. But, you must also consider their pricing, ease of use, effectiveness, and customer care Then, we will look at their service to decide which one you should choose.

And in today’s comparative article, we will do the same. Yes, we will compare the three top antiviruses and see who wins the cream of the cream antivirus award.

A General Brief on Norton, Mcafee, and Kaspersky:

Kaspersky, Norton, and McAfee bring the best malware protection out there. Yet, most people don’t know the origin, history, and generic information about these malware and virus security companies. It is crucial as people ask, “Are Mcafee and Norton the same company?” Some even ask, “Who owns McAfee and Norton?”

So, we will discuss the general information about these companies before heading into the main discussion.

Originally founded in Russia in 1997, Kaspersky has spread over 200 countries. As the Kaspersky website suggests, they serve over 400 million customers worldwide. It secures their desktop, laptop, and smartphones from antivirus, malware, ransomware, spyware, adware, rootkit, etc.

Currently, 3800 specialists work with Kaspersky to bring the most updated security system. Thanks to its brilliant security and customer care, Kaspersky has developed a brilliant reputation over the two decades of its presence in the market.

Unlike Kaspersky, McAfee was founded in America. The 1987 year, it came to the marketplace. At present, it was installed 525 million devices worldwide. They have employed over 7000 people in their company. John McAfee is the founder and present owner of the company.

The antivirus and malware security company has been in the market for 30 years. It has also built a serious reputation for its security to endpoint devices of its consumers.

Symantec Corporation established Norton Security in 1982. So, it is in the market for around 40 years now. Previously, it was named Norton 360 and Norton Internet Security. The security has served over 300 million end devices of their consumers. 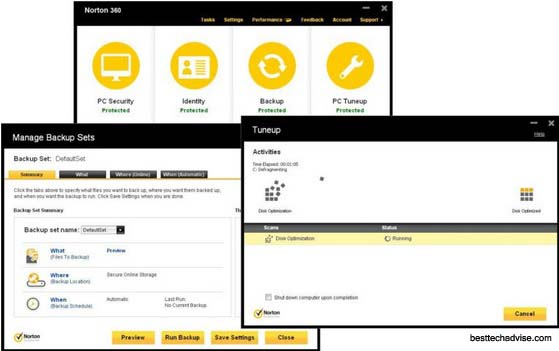 The company has also merged and worked with several companies in the market. Also, their continuous development has often put several other internet security companies at their stake and pushed their limitations. For instance, Norton vs Kaspersky or McAfee vs Norton comparisons has become evident these days.

Norton Vs McAfee Vs Kaspersky –

Is Norton good for Mac? Or, is Kaspersky good for your laptop and desktop? We will answer these questions. But, to answer them, we will compare their performance, effectiveness, features, and pricing. It will help you decide between the three top-tier internet and device security companies.

Norton, McAfee, and Kaspersky all deliver an outstanding outcome when it comes to features. In fact, on a head-to-head comparison, it will be tough to say which antivirus and internet security company offers the best features.

For instance, the low-end Norton Antivirus Plus offers the following benefits:

Next up is the Norton 360, which is the most popular product of Norton. It has three different packages for different users, including Standard, Deluxe, and LifeLock. It works equally well with a smartphone, desktop, Mac, etc. 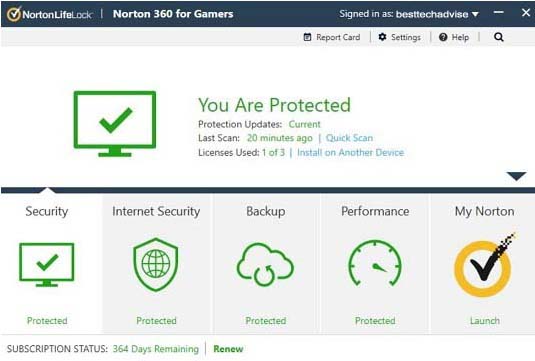 There’re also options for Norton Advantage and Norton Ultimate for commercial uses. However, the most common features of Norton 360 in all packages include the following:

McAfee’s features are highly streamlined. It has a single product and packages only. It is unlike Norton and Kaspersky, which has multiple products. Their only product is McAfee Total Protection. 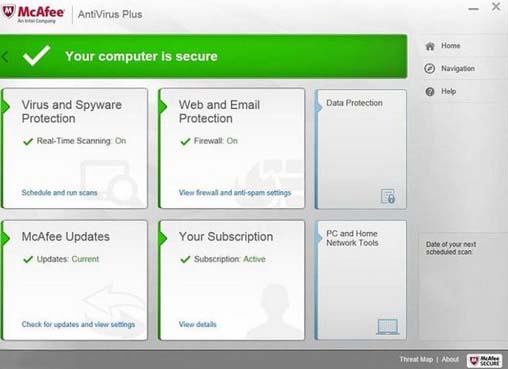 The most common features of McAfee Total Protection include:

Kaspersky has brilliant features too. One of the key advantages of Kaspersky is its Free Version. It offers protection of user-end devices from harmful and threatening websites. As you enter the advanced packages, you will receive some unique features.

Winner: Norton all security packages is the win of the feature category. Yet, Kaspersky and McAfee came out as joint runner-ups.

Undoubtedly, everyone wants the security suite to protect from malware and antivirus. Options such as parental control, password manager, etc., come later. So, we need to look at the malware protection ability of these three top-tier security suites at first.

As we found in our test, McAfee offers one of the industry-leading virus and malware scanners. It has an unthinkably large malware database. It combines the database with its advanced heuristic analysis. So, it offers the most updated and secure scanning and malware protection service out there.

Norton’s malware and antivirus protection and performance are just as good as Kaspersky and McAfee. Different experts have tested the security suite with 1000 plus malware, ransomware, rootkit, etc. It detected and neutralized 100% of the viruses and malware.

Next up, Kaspersky also provides a brilliant malware protection service. It can detect both old, widespread, and zero-day malware and viruses to nullify them. So, it too scored a perfect 100 in our testing.

Winner: All three security suites performed brilliantly. So, this category is drawn among the three companies.

Web security is the second most required function users look for from their security suites. So, who do Kaspersky, Norton, and McAfee performs in this category? 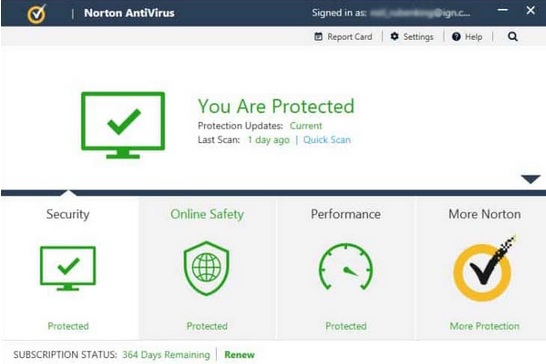 Norton, undoubtedly, has the best web security, thanks to their Safe Web feature. It is a powerful and reliable security shield for protecting your browser information and saving you from thefts. It can detect and block phishing sites within seconds. The manufacturer has optimized it for different web browsers such as Chrome, Mozilla, etc. The best thing about Norton’s Safe Web function is it works both with Mac and Windows.

Next up is the McAfee security suite. It sits right between Kaspersky and Norton for web security. Its Web Advisor option is quite good. But, it is as efficient as Norton in identifying and blocking different phishing sites. Also, it is used only for Windows. So, be aware of the setback.

Winner: Norton is a definite winner in secure web browsing. The runner-up is McAfee and Kaspersky came third in the list.

You should know that the antivirus software impacts your pcs’ performance and speed. So, it is a crucial consideration because you would never like antivirus software that slows down your computers. Also, you would want to know the time these security suites will require to run a full scan of your device.

Kaspersky requires around 225 minutes to run a full scan of your device in optimal condition. Also, the pc slows down slightly while running the scan, but it isn’t very important. On the contrary, McAfee will need around 220 minutes to run a full scan on a heavily loaded computer. Although it is slightly faster than Kaspersky, it isn’t pretty commendable. It doesn’t slow down the computer but can’t detect as many items as Kaspersky can.

Finally, Norton scans the computer fastest at just 215 minutes. But, it slows down the device, and its item recognition isn’t impressive either.

Ease of Use and User Interface:

No matter how performance-centric the security suite is, it will be hardly of any use for you if you can’t handle it. It means the antivirus software must be easy to use with a user-friendly interface. So, which has a better user interface between Norton vs Kaspersky or Kaspersky vs Norton? 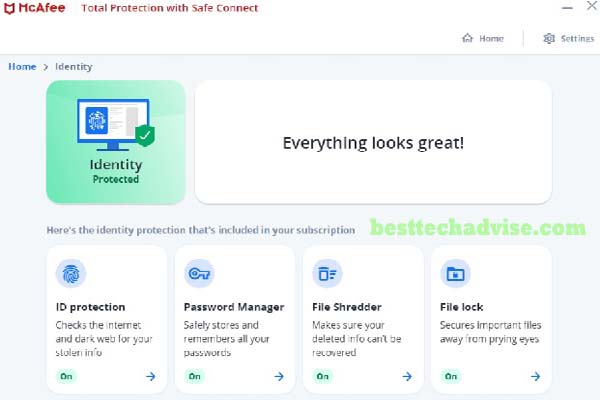 Next up, McAfee also offers an intuitive and clear layout for its home screen. It has quick shortcuts for different home screen options. It includes info, security, performance, and privacy. Moreover, it has a gear icon in the top right panel. You can access it for different customization and settings.

Finally, Norton is quite easy to use with an intuitive user interface. However, you will need a little time to get accustomed to Norton’s home screen and settings. Unfortunately, its most important features, such as parental control, password manager, web shields, etc., are located in various submenus instead of quick access. So, it becomes tough to find them.

Winner: Kaspersky has the best user interface, while Norton has the most complex one. McAfee is easy to use but isn’t as responsive as Kaspersky.

Read also: Bitdefender VS Malwarebytes: Which Should You Choose 2022?

The final point for Norton vs McAfee vs Kaspersky is their pricing. More importantly, we have to consider their after-sales service via customer care.

MacAfee has three different packages for different users. Its single-user package starts at $79.99/year. Next up are the packages for 5 devices and 10 devices, priced at $99.99 and $119.99 for one year.

On the contrary, Kaspersky has different packages for different user requirements, from individual to commercial. It offers three different security systems. The lowest is the Kaspersky Antivirus package which starts at $29.99 for a single device. Additionally, it has internet security and total security packages as well. The costing will vary depending on the number of subscribed devices. But it starts at $59.99 for Kaspersky Internet Security. Then, it goes all the way up to $300 for the Kaspersky End Point Security Cloud.

Finally, Norton starts at the cheapest subscription fee, starting at $19.99 for a single device. Its higher-end packages are also pretty affordable compared to Kaspersky and McAfee. You can get the Norton 360 Deluxe just at $49.99 for five devices, which is its top-tier security option.

And in terms of customer care, all the three companies offer brilliant services. Norton and McAfee have respectively 60 days and 30 days money-back guarantees. Kaspersky has the fastest response to any query that we love the most.

Winner: If you want to cover more devices at affordable pricing, you must choose either Norton or McAfee. Kaspersky is the most expensive of them all.

Norton Vs McAfee Vs Kaspersky: A Comparative Discussion –

Is Norton Antivirus Good For Mac?

Norton Antivirus product is one of Mac’s best malware and antivirus protection. It offers Mac users unlimited password manager and VPN services. Also, it has options for dark web browsing monitoring. Also, it is an affordable internet security option. Thus, Mac users can depend on the performance and trustworthiness of Norton.

Question: Is McAfee the best antivirus?
Answer: McAfee is a leading antivirus and internet security tool in the market. It performs equally better with Kaspersky and Norton in head-to-head completion. So, you can depend on its performance.

Question: Is Mcafee Livesafe good?
Answer: McAfee Livesafe is a great deal for securing any device from viruses, malware, and ransomware attacks. It will also block phishing sites and boost your desktop performance greatly.

This comprehensive discussion on Norton vs McAfee vs Kaspersky shows that you can choose either of these top-tier antivirus and internet security suites. In our 6 comparing points, Norton won in two categories, Kaspersky was the winner in two categories, and McAfee won in one. The other category was a draw.

Of course, not every category holds the same level of importance. So, you have to decide on the priorities. Nonetheless, Norton and Kaspersky performed better in all categories and were consistent. Moreover, Kaspersky and McAfee could detect and block maximum phishing sites successfully. On the contrary, Norton has intelligent optimization so that you will love its user experience.